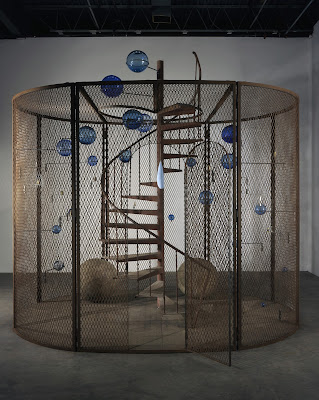 Structures of Existence: The Cells

Louise Bourgeois (1911, Paris - 2010, New York) has gained a status as one of the most striking and influential artists of the 20th century. Many are especially familiar with her large ‘spider sculptures’ – including Louisiana’s visitors, who since 2003 have been able to experience
Spider Couple, 2003, as part of the museum’s collection.
It is thirteen years since Louisiana last presented Bourgeois in a major exhibition: the retrospective Louise Bourgeois. Life as Art, 2003. Since then, the artist has become a central figure in the museum’s collection.
Now we present another major exhibition that concentrates on one of Bourgeois’s most original bodies of work: her Cells.
The name cell plays on all the meanings of the word – from prison cell to monk’s cell to the smallest biological units of the body. Each work is an independent spatial unit filled with carefully arranged objects which, ininteraction with cell walls of glass, wire mesh or old doors,
create psychologically tense and sensual scenarios.

Read more at Louisiana
Posted by Kristian Folkman at 6:30 AM