When Gundersen chose his modernistic form he was quickly acknowledged as one of the leaders in the abstract art form in Norway. Gunnar S. is now regarded as one of the most significant painter of the Norwegian post-war period. Even though he never received the international acclaim he might have deserved, he became a unifying figure among his contemporaries in Norway. His work has been an inspiration for many artists in later generations. Source: Wikipedia.

From the last GWPA auction: 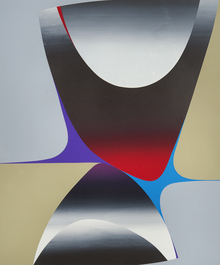