The first impression entering Henie Onstad is that of being absorbed, overwhelmed. This is bigger than life: format, colors, motive and scale of production. There is this strong feeling of intellectual presence even after her death. She becomes bigger than life as she reenters the art scene. And she becomes even bigger by out-winning her contemporary audience to which she did not want to expose herself.  Everything she did as her life project is really so far outside regularity it deserves full attention. Large canvases with clear, bright colors, organic objects and composition, mystic writing, spiritual messages and heavy symbolism. This is really more about boarding a spiritual universe than looking at pieces of art. Thoughts wander to Spanish surrealists like Salvador Dali and further on to an artist like Antoni Gaudi: subconscious, organic, distinct and heavy laden use of colors. Even art noveau and the use of organic elements come to mind. But Klints work is really about breaking a lot borders. Borders made up by religion, and natural science and how we look and are not allowed to look at the universe. Her work represents a type of stubborn and intelligent opposition that will continue to motivate and influence both art history - and hopefully - even more will it influence contemporary art. Klint opens up to another world of perception, than of the mystic, subconscious and in line with philosophers like Rudolf Steiner and Carl Gustav Jung.
Colors that can be felt, not explained. Yellow for the male, blue for the female! 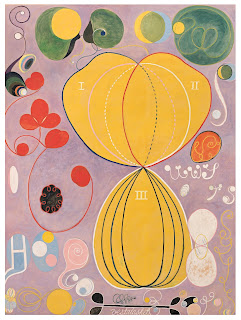 The lock if of the treasure chest and hopefully the full impact will be for many years to come.  First of all – the present of a female painter that predicted her works to challenging and provocative to be seen before decades to pass by. What an artist – how did she endure in her own without expecting any type of reward or recognition? Isn’t that substantial motivation for coming artists who want to push borders?  Produced early 1900 century, they surfaced now by the wish and will of Hilma af Klint herself. That is pure visionary skills and in line with her work, a statement of creative control. The message in these pictures is so overwhelming in its universal language, composition and form, it can survive time. She knew, and was definitively right about just that. To absorb it requires a format that allows for stepwise perception by the viewer. Hilma had this control, even with than by giving instructions on how to present works, by example (notice title) not splitting up the “The Ten Largest”, a group of canvases depicting life from conception to grave. I expect more to be said about influence from her contemporary artists. Just a pity her influence was locked down and now reopened - so many years later. She would have changed art, even in her own lifetime.

This is the observation of Kristian Folkman

Posted by Kristian Folkman at 11:30 AM