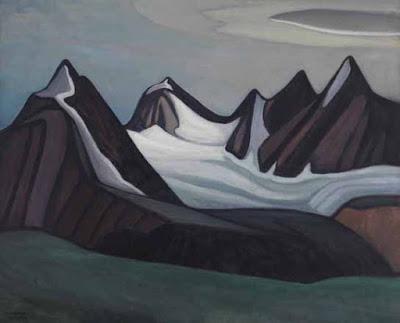 "Lawren Stewart Harris (October 23, 1885 – January 29, 1970) was a Canadian painter born in Brantford, Ontario, who was one of the best known landscape painters of the Group of Seven, a group of artists who set out to create a distinctly Canadian art. He pioneered a distinctly Canadian painting style in the early twentieth century".
They turned out to be under influence of contemporary, Scandinavian artists. More bio here.

Scandinavian influence: "Around 1915, he and his colleagues found resolve in the example of Scandinavian artists such as Gustav Fjestad, who combined an awareness of issues of verisimilitude with a strong sense of design". Examples of Fjestad paintings.

The arctic nature is unike. It has been a rich source of inspiration - and still is. Light and colors different from anything else.
The link to Norwegian painter Nicolay Astrup falls into mind when observing Harris paintings.

Posted by Kristian Folkman at 10:42 AM